the long overdue truth about bill

I suppose I owe it to the Internet world to come out with the truth about Bill.

Remember right before Christmas when my Pawpaw got EJ a dog? Sweet right... I've been hesitant to come out with the truth but here is the story of how we were dog owners for less than 24 hours.

Four days before Christmas we get to my dads anticipating the union of our little family and Bill, the puppy. We were very optimistic and excited about him joining our family and couldn't wait to see how happy EJ would be around him. I mean why shouldn't we get a dog? We can do anything!

My Pawpaw got there with Bill and there was no doubt he was a cute puppy. He was teeny and the way he sort of fumbled around as he walked had a way of tugging at your heart strings.

But then as soon as I held him my skin started to itch and turn red and my eyes would water. Then they shriveled up like cartoon eyeballs and fell on the floor. He started looking less cute. I knew I had allergies to dogs but with some it's not so bad so I tried to be positive about it and we went about our day. Evaleigh could have cared less he was even around but that could have had to do with her obsession with Christmas presents and food everywhere. We took family Christmas pictures and Bill was in every single one. 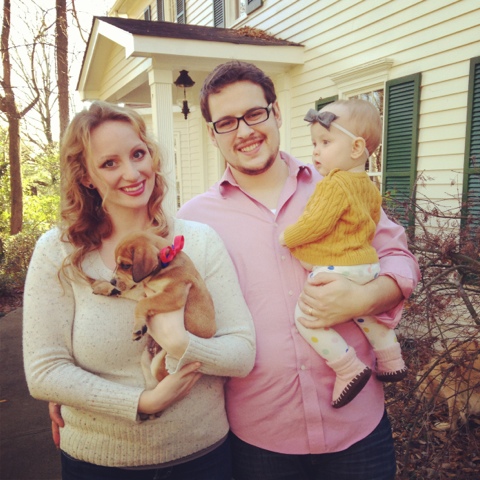 He took a couple of naps in my arms and as cute as it was my skin wouldn't stop crawling. I kept looking over at John and saying, "This is fun right? Yay, we have a dog.". I think with every sentence like that I was trying to convince myself that I wasn't about to have a nervous breakdown. In my heart I already knew we had made a terrible decision.

We finally got to my Aunts house for Christmas dinner and he took a walk outside. The little sucker had a nice poop and we took him inside to introduce him to the family. I think everyone in there knew the poor guy didn't stand a chance but me. My family later told me the look on my face was sheer terror. Bill started humping EJ's leg and would NOT get off of her diaper. Bless his little canine heart, he didn't know better but he kept jumping up on EJ's face and she did NOT like him. My cousin Brittney bet me it wouldn't last a month. I tried to put on a brave face a acted a little mad. "No...psh...Bill is a part of our family now. How dare you say that. We can do this". (I think) 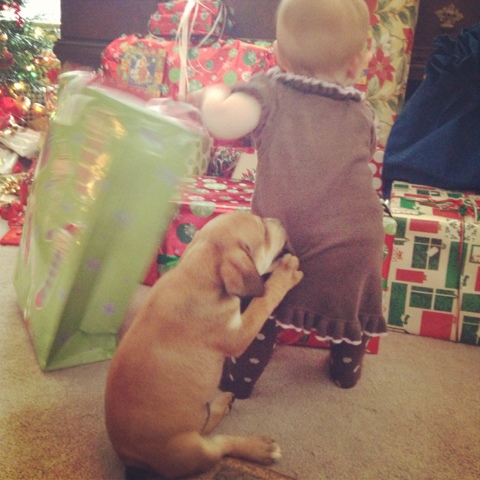 I started thinking, "What did I get myself in to? A puppy and an almost one year old? I am insane." Horror music was playing inside of my head, you know like the shower scene in that Alfred Hitchcock movie. All i could see was a future of EJ eating soggy dog food with Bill and them laughing and pointing at me together while I cleaned up their messes. Bill was looking less cute.

It was time to go home and Bill and EJ cried for the first 30 minutes of the trip home. I finally blurted out to my mom, "I CAN'T DO THIS!!!!!!!!!". I called John and we decided right then and there we were in over our heads.

Babies I can do. Animals I cannot. I don't know why I thought getting a dog would magically turn me in to an animal person. But it didn't, It's just not me. If anything it proved to me that I never EVER want an animal. I guess you just have to know your place. Me...well I'm just not an animal person. Sorry Pawpaw.

Now I'm not knocking anybody who has a furbaby. I just prefer my hypoallergenic human baby.

That night John slept downstairs with Bill, he went to the bathroom 8 times and bit johns ear all though the night. When I woke up I found a nice brown stinky present from Bill under the tree on top of one of John's presents. It read "To: John From: One of Santas little helpers". At least we knew how Bill felt about us too.

That day we sold Bill to a family with four children. The little girl who got him said with tears streaming down her face, "This is the bestest Christmas ever!!" I shed a tear or two when they took him.

But mostly because we were free again. Wherever you are Bill, thanks for teaching us an important lesson. We can not do everything. 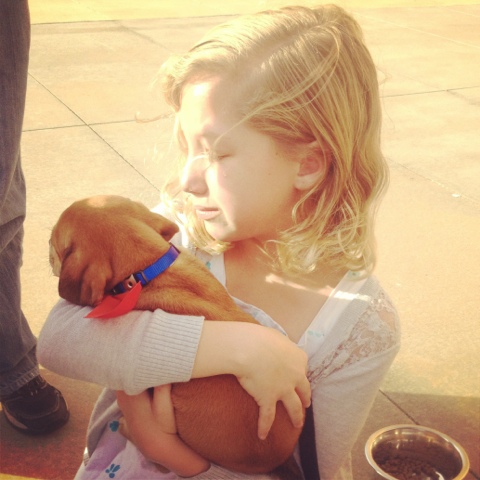 Aw for how traumatic that must have been it's kind of a funny story. And definitely a good lesson :)

Autumn @ Autumn All Along said...

We brought home a rescue dog for a trial period this summer. A week in, I realized I couldn't do it either.

Even though I have always been an animal person, I realized it was totally different when I am totally in charge of it. We ended up getting a pet bird and it is likely the only pet we will have until our kids are old enough to beg for more. I love the bird, but I wouldn't want anything else.