Thursday October 17th I had my 41 week and 5 day doctors appointment.  We were going biweekly for non stress tests and biophysical exams to make sure that Avett and I were both still doing well.  The doctor determined that everything was perfect.  My placenta wasn't ageing, I still had plenty of amniotic fluid, and Avetts heartrate was fluctuating and responding perfectly to stimulus.  Dr. Dott checked me and said I was dilated 5cm and was 100% effaced and that my water bag was paper thin.  He said,  "I have no idea why you haven't gone in to labor, this baby is hanging on by a thread."  He then said "We have two options you can give up now and have a csection or we can trust your body and keep waiting."  I immediately said sternly that I was not going to give up.  I knew he wasn't pressuring me for the csection though. Dr. Dott is such a gem of a doctor.  To deliver NUVBAC at Northside is like the unicorn of births and I knew Dr. Dott was determined to help me do it and was such an advocate for VBAC's.  I had waited this long what was a few more days.  I mean clearly he couldn't stay in there forever.  So even though I was 12 days over my EDD and I was so anxious to meet my boy we went back to the waiting game.

John was concerned to leave me alone that day considering that I was a walking ticking time bomb.  So my mother came over and we spent the day shopping and walking around with Evie.  That night John and I put Evie down for bed and after an episode of The Cosby's and some bouncing on the ball we went to sleep around 10.  I woke up to the sound of Evie crying at 1am. I went in to her room and calmed her down and stayed in the chair in the nursey until she fell asleep.  As soon as I sat down I started having contractions.  They weren't strong but I knew they were very different from the Braxton Hicks I had been feeling each day.  Since I had my phone with me I started timing them and they were coming about every 6 minutes.  I sat there for about 40 minutes feeling them come and go and then decided to take a shower.  When I got out they had slowed down but considering that just earlier that day the doctor said I was at a 5 and I would probably be one of those women who go in to labor and then give birth under a bridge on the way to the hospital, I decided it was go time.  I stood at the edge of the bed and called out John's name.  He woke immediately and I said, "I think it's time."  He popped up and started asking me all sorts of questions and running around wanting to make sure everything was ready.  About that time Evie cried again and he went in to sit with her.  We texted back and forth until she fell asleep again.  During that time I called my mom and let her know we decided to go in to the hospital and that we needed her to come be with Evie.  John showered and packed the car and we waited for mom.  She got there about 40 minutes later and we stood in the cold parking lot and said a prayer in the dark and quiet 3am night.

John and I headed out to the hospital and the roads were so clear and it was so peaceful.  My contractions were still irregular.  He dropped me off at the labor and delivery entrance and on my way in I had my first contraction where I had to stop walking and hold on to the railing.  We got checked in and they took us to our room.  By this time it was 3:30am and my contractions were ranging from 12 minutes to 6 minutes apart. They decided to admit us and let me labor through the night and Dr. Dott would come see me in the morning.  I was able to sleep some, only being awakend by nurses coming in for vitals and contractions.

Around 7 the nursing shifts changed and one of the most incredible things happened, we met Cindy.  How do I even begin to describe Cindy, I couldn't have done it without her positive spirit and encouragement and ability to read exactly what my body needed.  She is a 74 year old black midwife from St. Martin in the Carribean islands.  She studied midwifery in Liverpool, England and then went on to practice in Ireland, Canada, New York, and has been here in Atlanta for 24 years.  She walked in to our room and said in her beautiful Carribean/English accent, "This room needs an aroma."  She took out a bottle of lavender oil and put it on some gauze and laid it on my pillow.  I told her I had brought some of my own oils for the birth as well and she said, "Well get them and let me rub them on your feet."  I looked at John wide eyed and we both knew that she was made for us.  That morning before we left for the hospital we prayed for the nurse who would be working with us. I knew that trying for a Natural Unmedicated Vaginal Birth After a C-section would require a supportive staff.  We asked that we would have someone who would be understanding and encouraging of our desire for a VBAC.  I told Cindy immediately that she was made for us and how grateful I was that it was her who was with us.  She held my hand with her old hands, they were so cold and felt so good on my hott skin, she said, "I want you to know that this morning when I woke up I prayed for the body that I would be helping and it was you."  I was in awe that this was who was there to help with Avetts delivery.  In that moment I felt that I understood a part of why Avett had to come when he did.  Everytime she would leave the room John and I would smile so big and look at each other in such disbelief that we were so lucky to receive such a nurse like her.  She was full of stories of past deliveries and I loved hearing every single one. Her voice was so soothing.  She ended up refusing to take on another patient that day and she was in the room with us the whole time.  She was like my own doula. She would hold my hand through the contractions and talk to me about my breathing. She had such a calming effect on me and I knew she was sent straight from God.

By 8:00 Dr. Dott came in and he said we could let me labor through the day and see what happens or he could break my water.  Well I had nearly been pregnant for 10 months, 41 weeks and 5 days let me remind you, and it was time.  I could feel that Avett was ready and the spirit confirmed it to my heart as I said out loud that I wanted him to break my water.  I looked to John for confirmation that he felt good about it too and we both knew it was the right thing.  So at 8:30am it all began! 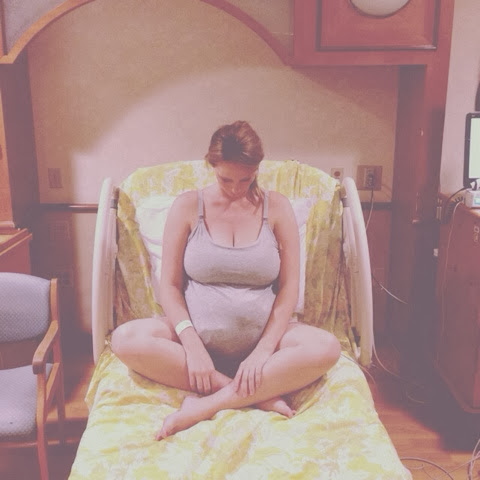 Email ThisBlogThis!Share to TwitterShare to FacebookShare to Pinterest
the deets: AMM, Avett, birth, birth story, I did it, natural childbirth, nuvbac, vaginal birth after cesarean

Oh my gosh- I'm holding in the tears! What an angel of a nurse/midwife you had! I mentioned oils while labor ing and got the strangest look- I felt I service and didn't mention them again. :/ I'm on pins and needles! Thank you for sharing this- I am so obsessed with birth stories. Each one is so amazing in its own special way. Xo

*tears!* how amazing! Praise the Lord for Cindy!!! I love everything about this. Can not wait to read the rest!

My "Cindy's" name was Rose! She was AMAZING. You cnprobably guess where Clara's middle name came from :) those nurses are straight from God.

You are giving me so much hope that my next birthing experience will be so much better! When I said I wanted to go natural, every nurse said "oh just get the epidural already." and since it was my first baby and I was so shy, that's exactly what I did, but I want to go for it next time, can't wait to hear the rest!