Give Oh Give Away! 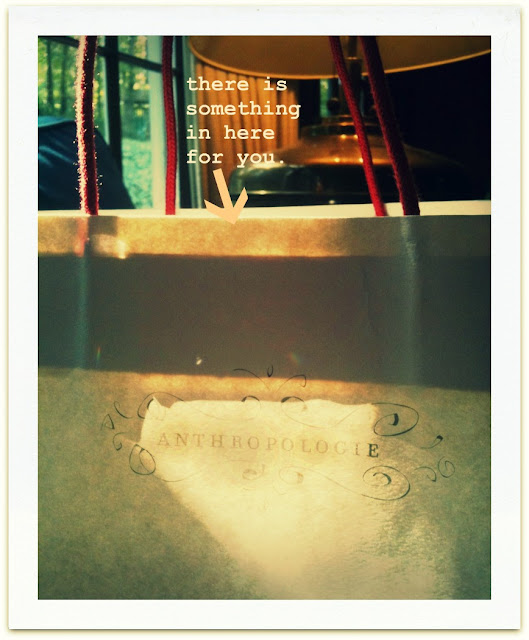 But before you can know what it is you'll need to read this story to understand part 1 of our giveaway!
So, who wants to know how John and I got engaged?
Oh, everyone?
Ok, well here you go.
We took people by surprise in the cold early month of January. A lot of people said phrases like, "I didn't even know that they were dating!" or "Wow, that was pretty fast!" You probably are wondering how it all went down so here it is, the low-down.
We met at church in September 2009. John moved to Atlanta to take a job working for a company that provides video conferencing for law firms. I had been living in Atlanta for the past five years as a vocal performance opera student at Georgia State University. We met playing dodge-ball and at first I fell in love with a handsome boy who I cheered on from the sidelines named, "Shaun." To my embarrassment later that night I was informed that the so called stud "Shaun" was actually named John.
Soon after, one night, I came home to find John in my living room playing guitar. That night we hit it off playing music for one another till the wee hours of the morning.
We started dating and were a little unsure of what would happen seeing that John had plans to move out to Utah and attend Brigham Young University in January. After a couple weeks of dating one night John asked me how I would feel if he stayed in Atlanta. I felt surprisingly peaceful and excited about that prospect considering the short amount of time we had spent together. The next day the decision was divinely made and everything came together perfectly. John had decided to stay to see where things would go...and go they did.
Our courtship was short and romantic. It evolved around music and laughter. I was involved in a basketball accident (trying to keep up with John's mad skills) in early December. I fractured my heel bone and got a third degree sprain in my ankle. John took care of me the whole time I was recovering, carrying me on his back to the bathroom and bringing me my toothbrush in bed so I wouldn't have to walk to the bathroom. I was wheelchair bound for a little while.  I knew through his selflessness and willingness to serve me that he would take care of me the rest of our lives.
We have always shared a passion and deep love for music. We have loved learning new music together and serenading one another.
One night John was changing the strings on his guitar who he had affectionately named "Hannah" and I made us matching rings out of the strings, the "g-string" naturally was MINE. A few nights following John took that that G-string ring and put it on my finger and said, "I want to be with you forever. Will you be my wife?" I said "Yes!" and the rest is history!
"So, what does this have to do with me?" you may ask.
For part one of our giveaway we are going to give you a custom made guitar string ring!  The ring will be made out of the very strings that John played on the whole time we were dating, engaged, and as long as we have been married thus far.  They are Cleartone strings.  This will be a special ring that had been the bearer of many songs.  It will look a little like this one.  (This is the one he proposed to me with.) 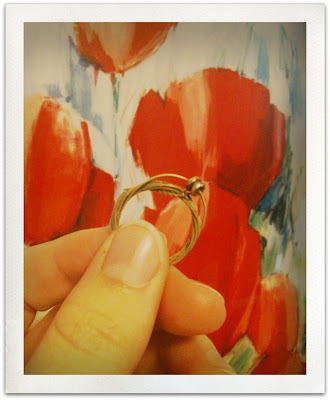 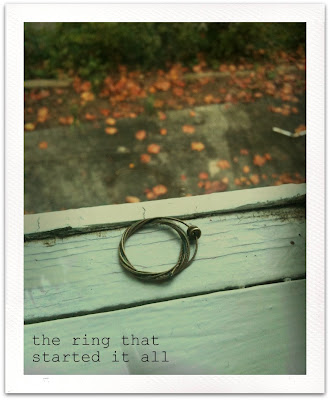 Now for part 2.  I'm sure you are all dying to know.  Because we all think these are the best the winner will receive...
4 BEAUTIFUL ANTHROPOLOGIE LATTE BOWLS! 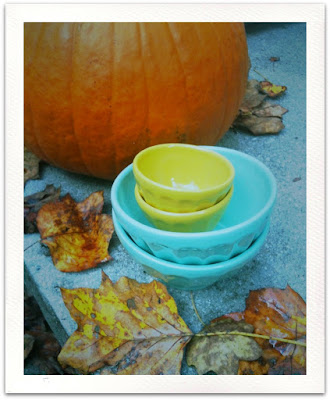 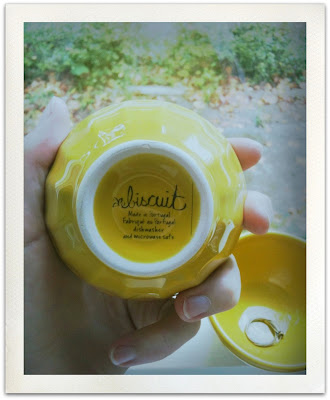 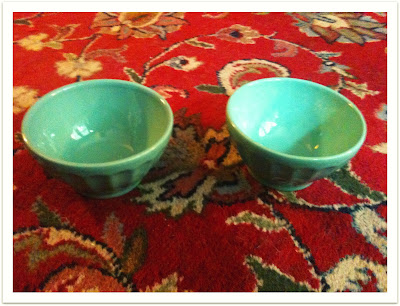 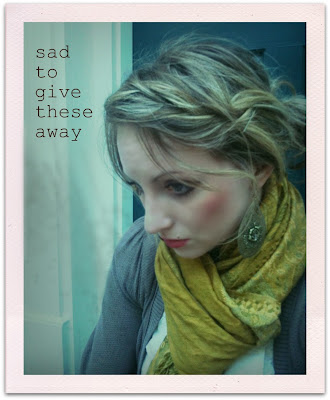 (But happy they are going home to you!)
Leave a comment on this post for each of the following that you do.  Here is what you have to do:
1. Become a follower of the blog.
2. Get our button and post it in your HTML on your blog.
3. Send us a yummy recipe at tunesandspoons@gmail.com
4. Tell us what song you would like to hear us do together.  Hear a lovely example (here).
5. Blog or facebook about it.
You will get one separate entry for every one you do.  So your name can be in our hat a max of 5 times!  (If you have already done some of these please still leave a comment letting us know that as well!)
We will pick the winner from a hat randomly and announce the winner on Monday October 25th!
Good luck Spooners!
Posted by Tunes & Spoons at 8:15 PM

Sent you a recipe - smashed potatoes with chives! Yummm. :)

RACH!!!! I WANT A RING! sadly i cannot follow from my tumblr:( but i'll do the rest love!
ashley

Ooh, I want to WIN!! Okay, I want you guys to play "Free Fallin'" by JM/Tom Petty. Or anything by Britney, haha! Seriously. It would be awesome.

Adding your button to my blog!

Lots o' recipes on my dinner blog...hmm, I'll pick my fave and email it to ya!

I follow Tunes and Spoons! Button is added and I just published a post about this fun blog! I would love to hear you guys perform something that you wrote together! I will pick out a yummy family recipe to e-mail. Great work you two!

okay okay okay. so first things first: thank you for sharing your story. it is so precious, and the guitar rings are ridiculously amazing.

1. already follow
2. love your button already classing up my blogspot
3. i secretly think you are trying to steal all of my grammy's recipes, but i sent you another for chocolate mint squares (christmastime treat!)
4. i <3 the song "dream" by priscilla ahn, and i think you two could do it beautifully, guitar and singing.
http://www.youtube.com/watch?v=MKfDwChOoHI :)

Jenni@Story of My Life said...

By the way, I'm totally and shamelessy copying your photographic style with my next post (to be published tonight or tomorrow). Hope you don't mind! :)

That is such a cute love story! & the ring-how clever!

Hi Hi Hi!
First let me say that your love story is beyond amazing and inspiring.

I am SO excited for this giveaway! I just realized that I realized I read your blog ALL the time and I am not following.

I am now a follower! Yay! I will be emailing you a yummy recipe from my grandmas recipe book! annnd I would love to hear you guys singing "Lucky" by Jason Mraz and Colbie Caillat...it's me and my boyfriend's song

(If I don't win, I secretely hope you play Lucky...if you haven't already...caus I love that song)

I am a follower. modestapple at gmail dot com.

I would want you to sing "For No One" by the Beatles. (I know it's kind of sad, but I love that song.) modestapple at gmail dot com.

Everyone!!! We went through and listened to all of your songs tonight and we love each and everyone! So keep them coming! There is so much beautiful music out there that we don't even know, thank you for sharing it with us!

I love the story of the g-string how special!! Engagement stories are the best!

YAY! I've never followed a blog before...I made your caramel apple pork-chops the other night for my boyfriend and he LOOOOVED it. SO...thanks lady! :)

Your story gave me chills and I almost cried! It reminds me a lot of how Tony and I got together. He too- played guitar for me the night we met and I played for him. He has since lost a little of his love for it and it makes me so sad! But at least it brought us together- music literally did! (It's a long story though ;)

I follow your cute cute blog!! That ring is seriously so cool, btw!! You guys should sell them on etsy (:

Your engagement story is so so sweet! I love it!

I am always unsure if I should participate in giveaways because I live in Germany and the shipping is quite expensive...bit I'll try anyway because the bowls are simply too awesome!!

I am following and I'll try to send you the peach cheesecake recipe on the weekend. We have different measurements in Germany, so I will have to figure out how to change them first. :)

I'm not sure how I didn't come across your blog before today but I just spent the last hour reading it all. I just love it and now I will be doing all 5 things so I can hopefully win something :)

1. I am now an offical spooner (that is just too cute!)

I have fb about you, added your button to our blog (ruftyrumbles.blogspot.com), sent a delicious recipe, and now for the song you should sing...maybe Bruno Mars "Just the Way You Are." This may be one that is more John singing it to you but it is just such a sweet song.

Um ok, so I seriously failed at trying to convert the measurements from the cheese cake recipe.
But I just posted your button on my sidebar. :)

I still need you to fulfill my dreams and sing "Beauty and The Beast" please!

fruitbats- when you love somebody

I just found you today from a facebook message. I'm a follower.

Song- Reba and Brooks and Dunn does this amazing duet (dont know if you dig country) but it's good.

Great blog! Why haven't I seen this yet?? I would love to hear "Hard Times" by eastmountainsouth (one of my favorites!)
I posted you on my photography facebook page, and I love your recipes!

I follow your blog, I already posted your icon,

How about you two do Elephant Love Medley from Moulin Rouge, I bet that could be interesting in an acoustic version... besides, it's about love, which you two do fantastically. :)))

Aaand I'm sending you a recipe as we speak.

What a PERFECT day to find your LOVERLY blog, Rachel! Not only do I love Latte bowls and your love story, but You, YOu, you! I am absolutely a new follower. And pee.ess. I JUST told my husband the other day I needed 4 new latte bowls and that in the morning if he would please leave the blue for me, because it is my favorite color of them all. Serendipitous, I tell you. And why are you parting with such loveliness?
pee.pee.ess. I read your g-string ring story before I even happened upon your blog. The sweetest. ;)

And I just blogged about an idea I got from you.

I have THE perfect song for you guys, Rachel!!! It's called Where the Road Meets the Sun by Katie Herzig & Matthew Perryman Jones. Go youtube it. It will give you chills. I put it on repeat often. I'm so new to your blog I don't know if you know it or what, but I DO know I will be spending a lot of time catching up on your blog. So loving it!!! xo

Ok, so I posted your button on my blog, I have only just started it so there is really nothing on it yet. I sent you an email with a recipe, I am now following, I commented about your blog on facebook and now for song suggestion, I'm kind of liking the idea of you two trying out "You Got What I Need" by Joshua Radin. I kind of feel like I could come up with a better one, but I'll try to do that next time. So all 5 are done. I'm excited. :)